The 21' SeaCraft was built for ocean going fishermen, boasting of a raised deck forward to punch thru big seas and then designing a reverse shear line allowing for lower freeboard at the stern for easier fish handling.  Included was a cabin with 7' V-Berths, a marine head, lots of storage, and a slide hatch for easy access to the deck from the cabin.   A spacious cockpit with more storage and fore and aft facing seats.  There's an option of a hard-top or canvas top.  The 21' sported two models, the "Sportsman" and the "Overnighter".
#####
The SeaCraft 21' was the first production boat using the new Variable Dead Rise Hull design.  It was also Moesly's ocean racing boat in the early 60's.   To begin, a prototype was built using the new bottom design, made totally out of plywood, with a length of 23 feet.   It was constructed in 5 weeks during after-hours at the shop, often working until 11pm.  The goal was to complete the boat in time to test her in the upcoming Miami-Nassau Race.   She may have finished 5th in her first race, but as far as speed, agility, stability, tracking in a turn, slicing thru the waves, and gently landing in the water, she outperformed Moesly's expectations.  It should be noted; the winner of the race was sporting a 1000 hp inboard, versus Moesly's 100 hp outboard.  In addition, Moesly was tied up in Cat Cay about 25 minutes working on a stuck float valve in one of the carburetors, while boats were passing him by.  Moesly's finish time was 25 minutes behind the leader.

After more testing of the prototype in various wind and water conditions, they were ready to build a fiberglass version.  He shortened the design to 21 feet and made a few other modifications to the hull design.   This same model was used for racing and over the years was modified above the waterline.  Molded interiors with gelcoat finish and teak trim soon followed as well as a grid system for stringers and bottom support. 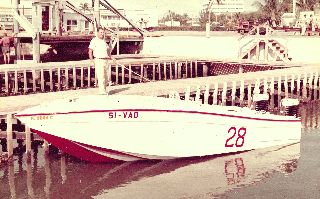 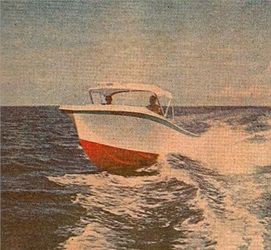 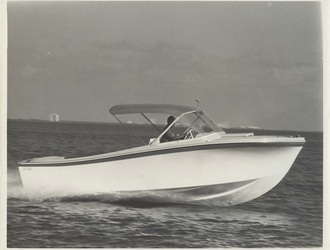 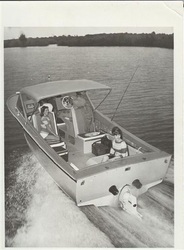 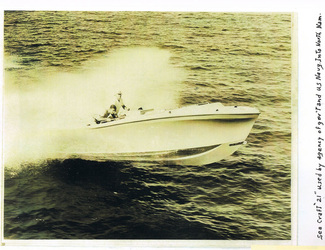