The History of SeaCraft ... From the Beginning

Manufacturing Plant in Miami, Florida
The legacy of SeaCraft boats began in the early 1960's when Carl Moesly purchased the inventory of American Marc, including 80 boats, machinery, tools, supplies and molds at their plant located in Miami, Florida.  He operated under his name a short time and then incorporated under the name of SeaCraft.  He began his new venture of designing, building, racing and selling SeaCraft boats; not realizing the appreciation for his design would be so strong decades later. 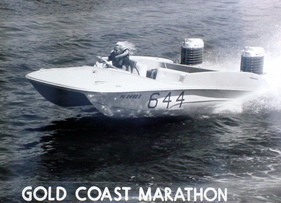 Driver: Jeanne Moesly
The original American Marc molds were of a various assortment of styles and designs without any 'family' resemblance.  Moesly saved only four molds from the fleet of a dozen designs.  Since the 16' Catamaran was one of the more interesting designs, he began production of it and the 14', 17' and 18' designs, building them stronger and more suitable for the choppy Miami waters.  To bring name recognition to SeaCraft, Moesly began racing a modified version of the catamaran and did very well on the racing circuit with a stack of trophies and setting 4 world records for outboards.  The experience in building in fiberglass (a relatively new material at the time), testing it's strength and weakness in the Gulf Stream and choppy bay waters and then applying this knowledge to his designs was one of his biggest challenges.  The molds that were useless were placed in a vacant lot and burned.  Carl remembers it was amazing how fast and hot the resin burned.
_______________________________________________________________________________________ 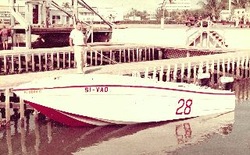 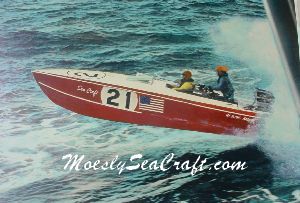 #21 - My Flying Machine
The debut of the 21' into the racing world made headline news with it's conceptually different bottom design, drawing a lot of attention from the media and many other boat builders.  Racing for 180 miles against the world's best, crossing over the Gulf stream in sometimes 6-10 foot seas and winning the outboard division many times over gave SeaCraft the name recognition the company needed.  Thus began the reputation of SeaCraft and it's VDR hull design.
________________________________________________ 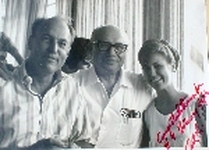 19' Bowrider
Moesly kept designing, building, racing and selling his boats.  Wearing many hats, kept him busy on the drawing board, out in the production plant or on the road convincing dealers to sell his boats.  His wife, Jeanne, also worked many areas, handling personnel, payroll, inventory, promotions, and racing herself.
Carl would often walk into the production plant with a drill in his hand.  His production manager would run and get the chalk marker, following Carl around as he drilled small holes in the hull of some of the boats on the assembly line to insure their quality and thickness.  The core samples would be weighed, the resin burned out and the fiberglass material carefully weighed to get the fiber-to-resin ratio, which is very important.  The holes would be marked and repaired.  This was Moesly's way of insuring quality control.
Throughout the development of SeaCraft, from its infancy to a fully operational boat company, there was no corporation debt.  By 1968, it was obvious, a further expansion was needed to keep up with the demand.  Rather than go into debt, Moesly decided to bring in a partner with financial backing to expand the business.  The majority interest was sold and Moesly stayed on for another two years designing, developing and overseeing the production of the SeaCraft boats.
Moesly often felt he sold his company too soon.   After all, it was on the springboard ready to take off, and he had so many new ideas of how to make the design even better.

The SeaCraft Story ... From the Beginning        (Currently in draft mode)

Standing on the top floor of the Dupont Plaza building in Miami, Florida on a crisp morning in June 1960, Carl Moesly was listening intently to the two men talking to him.  Dennis Kendall, a tall, lanky man in his mid-40's was saying with an English accent, "Mr. Moesly, we want you to build 6,000 boats here and distribute them east of the Mississippi to their dealers within the next 12 months."
Moesly looked at him thru his hazel eyes while his sharp mind began digesting what this man was saying.  Carl's thoughts were simple, "This man must be mad; I am in my bare clothes, no factory, no employees, no designs, no molds, no material with which to build boats, and he wants me to get 6,000 off the production line within a year?"
Dennis Kendall was president of American Marc, a company listed on the American Stock Exchange, located in California.  They built a variety of small boats ranging from 14' to 25'.  The majority shareholder was Mr. Arthur Vining Davis, the third man in the room and Moesly's current employer.  Moesly looked over at Mr. Davis, a small man, meticulously dressed in a 3-piece suit, with 90 years of aging lines on his face.  He looked serious.
Mr. Davis turned to Moesly and spoke in his commanding voice, "My aviation requirements are dimensioning Carl, so you can help Mr. Kendall."  He continued, "I will build you a plant here in Dade County."
Moesly had no idea what the American Marc boats were like or even how to set up a production line for manufacturing them.  Then there was this new material called 'fiberglass'.  He took all this in stride as he knew he would tackle it the same as he had tackled so many other challenges thus far in his life.  What he did know was that his life was about to change from aviation to boating.  Looking out the window of the corner office, Moesly saw his future as he observed several boats running and skipping over the light choppy waters of Key Biscanye.  "Not bad" Moesly thought, "Not bad at all".

And the story continues about his life at SeaCraft and what one man accomplished in so few years ...
(currently in draft mode)