The Wing ... An Experimental Design

Designed to be able to switch out and bolt different bottoms on the boat, this was strickly an experimental design.  The Wing proved to be an incredible testing machine, where Carl learned a lot about those things he wanted to know.  He learned as much negative as positive, but in the end, had a better understanding of the effects of wind, water and power on various surfaces of a hull.  This information proved very useful in his future designs. 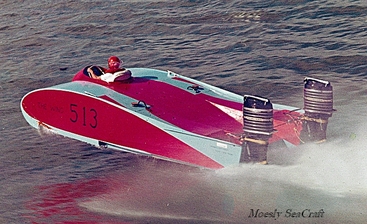 Wanting to do more than just build the American Marc boats, Carl decided to try something new, just for experimentation.  The cats had done well in racing, but why not take it to another level?  Why not develop the upper part of the cat to give lift, like an aircraft wing?  Most of their lift comes from the top of the wing, not the lower surface.

For the next 4 weeks, working after hours at the shop, he and one worker layed out and cut plywood, forming two hulls with a bridge in-between.  It was 18' long and had an 8' beam.  The cockpit was positioned well forward in the center of the tunnel.  At the trailing edge of the tunnel, hinged an elevator device that could be lowered to close off the escaping air trapped between the hulls.  The increased air pressure would result in raising both hulls out of the water.  If the nose or hull lifted too high, on top of the leading edge of the wing was a spoiler that could destroy the lift for the top of the wing.  The driver could operate this spoiler with a foot pedal.

This boat was raced by Carl, Jeanne and their son, Ron Moesly.

Soon after being built, Carl took her for a test drive.  In Government Cut, everything was going nicely.  The Wing was performing beautifully until he hit a large wake left by a sea-going tugboat.  The boat lifted up and basically went flying!  Carl looked down and saw the water too far below to feel comfortable.  Time to test the spoiler on the front.  He depressed the pedal, opened the spoiler on the top of the wing and the boat glided down to a gentle landing on the water.  He was impressed!

Ron had a difficult time managing that fine line.  When he took her in a race, the boat flew, he pushed the pedal, she lowered to the water, then she would fly again and he'd be pushing on the pedal again.  After too many times and too much time out of the water, one of the lower units finally did blow and he could not finish the race.  But his comment was "What an incredible ride!"

On a sad day, a skill saw was taken to "The Wing" and she was totally demolished.